University of Oregon School of Law 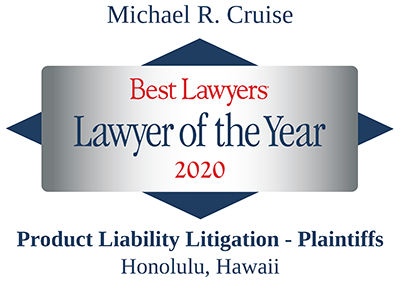 Mike Cruise began his legal career at the Legal Aid Society of Hawaii, where he represented parents and children victimized by domestic violence. In 2005, he opened his own law office and began to represent individuals and families that had been damaged by the wrongdoing of others, often corporations and insurance companies.

In 2010, he represented a woman who had been catastrophically injured when she fell on a slippery floor of a fast food restaurant and broke her back. The woman became Mike’s client after several more experienced lawyers turned down her case because it was too hard to win, they told her. The owner of the fast food restaurant, a billion-dollar multinational corporation, agree that Mike and his client could not win and offered very little money, even though her injuries were catastrophic. The woman had already accumulated hundreds of thousands of dollars in medical expenses, and required more than a million dollars in future medical and home care, as she lived in a wheelchair and suffered severe pain all of the time. So they were forced to take the case to trial where a jury would decide the outcome.

The jury unanimously agreed with Mike and his client that the restaurant owner broke its own customer safety rules, and decided that the woman was entitled to $5,700,000 in compensation. The corporation appealed the jury’s decision. The court of appeals agreed with the jury and upheld the $5,700,000 verdict, making that decision the largest jury verdict in that type of case to be upheld on appeal in Hawaii history. To Mike, witnessing his client’s courage and grit through the challenges of the case and her disability was life-changing. To be trusted to fight with and for her, in that fight for her life, was an honor beyond compare. To win was meaningful beyond belief. He and his client are close friends to this day.

In 2011, Mike joined Leavitt, Yamane & Soldner. Since then, he has continued to embrace the high honor that each client entrusts to him with each of their cases — when a wrongdoer has done life-changing or, sometimes, life-ending harm to them or their family, but will not take accountability for that harm. In many cases, wrongdoers ultimately offer to settle before a case goes to a trial with a jury and a judge, and often before a lawsuit even needs to be filed. However, when the wrongdoer or, as is usually really the case, the wrongdoer’s insurance company refuses to be accountable for the damage they have done, Mike is always ready to present his client’s case to a jury of their peers, and to trust the jury and the courts to see the truth.

A sample of some of Mike Cruise’s case results are:

· $7,500,000: Settlement in a defective crosswalk design case for young woman who suffered brain injury when hit by a car while she was using the crosswalk

· $5,700,000: Jury verdict in premises liability case for woman who broke her back as a result of slipping on poorly-maintained restaurant floor

· $3,000,000: Settlement for family of woman killed by bus while crossing street

· $2,000,000: Settlement in construction accident case for worker who fell through unprotected hole and suffered brain injury

· $2,000,000: Settlement for elderly mother and daughter severely injured in car crash by other driver who broke traffic safety rules

· $1,750,000: Settlement for warehouse worker who suffered crushed leg as a result of poor safety practices by warehouse owner

· $1,000,000: Settlement for family of woman killed by garbage truck while crossing street

· $1,000,000: Jury verdict for man who suffered back injury as result of slipping on wet restaurant walkway

Outside of the office and the courtroom, Mike is involved in two local non-profits, where he sits on the Board of Directors: the Legal Aid Society of Hawaii, where he had his first job as a lawyer, and Hawaii Appleseed.

Mike is honored to be a recognized by and a member of “Best Lawyers in America”, “SuperLawyers”, and the “Multi-Million Dollar Advocates Forum”, membership in each of which must be earned through case results and/or peer evaluation.

Regularly, Mike is invited to talk to groups of other lawyers, and on occasion judges about a variety of legal topics.

Wish to discuss your case with